Back to the Blog posts

The talk „personal productivity patterns“ by my colleague Stefan Rotsch inspired me to overthink my personal behaviour and methods. Although I’m practicing GTD for 7 years now, and more or less successfully, I am still not satisfied how some things work. I thought about what I could do to improve my routines or to tear away fear from certain ones. I have to admit I rely heavily on digital tools for this process. So the following might not be applicable to other tools or might not be a problem at all in an “offline world”.

I use OmniFocus to keep track of all my projects and tasks. It’s my reliable inbox for all of that also because it syncs to all of my devices. An issue I found was how I used due dates.

Before we continue let’s shortly look at how I prioritize tasks in OmniFocus: 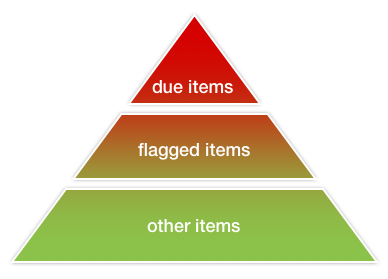 Tasks with due dates have the highest priority and ideally should be the smallest amount of all available tasks. The forecast perspective in OmniFocus shows me these kind of tasks.

Flagged tasks have medium priority. When I find that there are no “due soon” or “overdue” tasks left I can work on tasks which are categorized “medium”. In my setup they are stored in the “flagged” perspective in OmniFocus and I treat these tasks as those I want to tackle this week.

All other tasks.
They can be found using “contexts” or “projects” perspectives.

Reasons for using due dates

A reason for placing a due date on a task is usually: It as to be done at certain point or not later than that point.

Problems when misusing them

I personally used “due dates” whenever I found an action which needed to be done in the future (for me that doesn’t belong to the calendar because this doesn’t allow „checking“ it) and I want to be reminded about that later instead of having to worry that I may miss them if I forget to look into OmniFocus. Most of the time I realized these tasks were important to be done around that time but not critical to be done on that certain point (and sometimes not possible) so this was clearly an issue because setting a due date does the following:

I was using “due date tasks” for tasks which are more considered “timeframe tasks”. The problem was that there were naturally many tasks which need to be done during a specific timeframe. (like calling a doctor after he’s back from vacation) So due date is not the right fit here because a due date expects that you do this task at that specific time. OmniFocus even shows you that a certain task is overdue which means the task should’ve been done already which can cause a feel of guilt. Also adding a due date lowers the criticality psychology-wise due to the fact that you begin to ignore overdue or „due soon“ tasks.

So these “timeframe tasks” just need to be popping in at the right point in time but are not critical to solve at a specific time but rather within a timeframe.

By accident I discovered a really nice function in OmniFocus: “defer until”
If I have such “timeframe tasks” for the coming week I tend to flag them so they are placed in the “flagged” perspective. This perspective is a list I regularly visit to find current important but not critical tasks. The “defer until” function perfectly assists me here. If I have such a task in about 3 weeks I flag it. But then this task immediately lands on the “flagged” list which is too much since I don’t want all “future important” tasks to be there for my current week. So what I did was setting a „defer until“ date in 3 weeks. This will

The third one is really interesting because I have contexts which are location based. So imagine having a „timeframe task“ in such a context. I would be reminded every time I pass this location even if the task is not important yet. Adding a „defer until“ date moves it away from there and puts it back right when I need it.

If you’re using OmniFocus consider using „defer until“ for „timeframe tasks“ to not clutter your current lists and give the really important tasks their power back.